NEW DATA UP: Calculation of the Living Wage

A Calculation of the Living Wage

While the minimum wage sets an earnings threshold under which our society is not willing to let families slip, it fails to approximate the basic expenses of families in 2018. Consequently, many working adults must seek public assistance and/or hold multiple jobs in order to afford to feed, clothe, house, and provide medical care for themselves and their families.

Establishing a living wage, an approximate income needed to meet a family’s basic needs, would enable the working poor to achieve financial independence while maintaining housing and food security. When coupled with lowered expenses, for childcare and housing in particular, the living wage might also free up resources for savings, investment, and/or for the purchase of capital assets (e.g. provisions for retirement or home purchases) that build wealth and ensure long-term financial security.

The cost of childcare and housing for families with children exceeds all other expenses. On average, in each state, the typical family of four (two working adults, two children) spends 21.6% of their after-tax income on housing and another 19.8% on childcare. Faced with tradeoffs, a second working adult must earn at least $11,294 on average in order to cover the costs of childcare and other increased expenses when they enter the workforce.

Figure 2. Living Wage Expenditures for a Family of Four (Two Adults and Two Children) After Taxes. 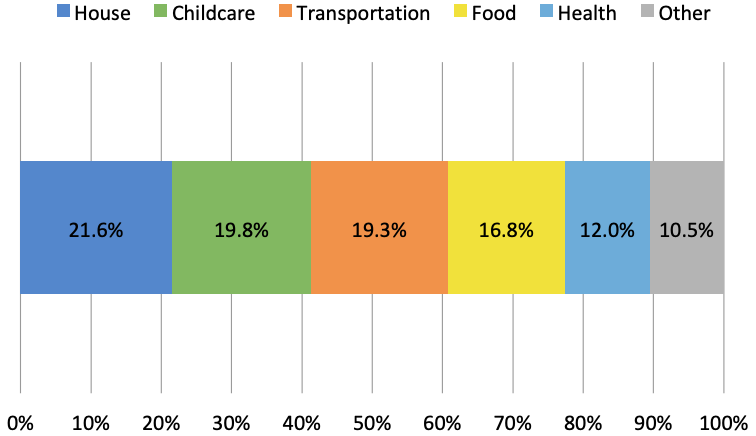 The living wage varies based on the cost of living and taxes where families live. Families of four (with two working adults, two children) in the North ($72,329) and West ($70,395) have higher average living wages before taxes than the South ($64,121) and Midwest ($64,025). Within region, the largest variation is between Northern states, where the living wage ranges from $65,502 in Pennsylvania to $88,056 in New York.

Figure 3: Range of State Incomes by Region, (Boxplot measures from the 25th to 75th %ile and displays median). 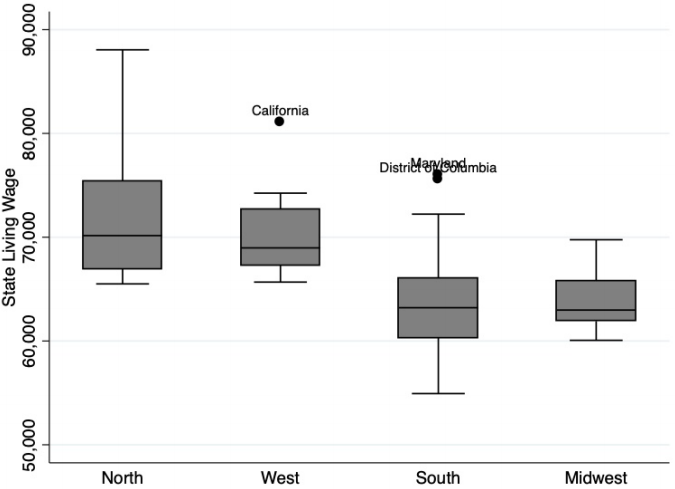 In most metropolitan areas, where the US economy and jobs are increasingly concentrated, the living wage is higher than the national median. Consistent with overall regional variation, of the most populous 100 metropolitan areas, New York City ($90,765), San Jose ($92,560), and San Francisco ($94,662) have the highest living wages for the typical family of four, before taxes.

Figure 4: Metropolitan Areas with the Highest and Lowest Living Wages for a Family of Four (2 working adults, 2 children), before taxes.